Everton have been put up for sale with an asking price of £500m. (Guardian)

However owner Farhad Moshiri has denied reports of a potential sale, insisting he is committed to the struggling club. (Liverpool Echo)

The Seagulls have put a £100m price tag on the Ecuador international. (Times)

Everton will continue talks with Marcelo Bielsa about becoming their new manager but will also consider appointing their former boss Sam Allardyce. (Independent)

Former Leeds boss Bielsa is unsure about taking the job while West Brom’s Carlos Corberan is another option. (Times)

Bielsa has had initial talks with Everton but has told them their squad is “too slow” and that he would want pace options added to their squad in the remainder of the January transfer window. (Mail)

Frank Lampard, who was sacked by Everton on Monday, is desperate to prove himself and is considering a move abroad to have a fresh start and reset. (Sun)

Leeds winger Jack Harrison, 26, is a target of Leicester. (Telegraph)

Villarreal and Senegal forward Nicolas Jackson, 21, will have a medical at Bournemouth on Wednesday before a 23m euro (£20.3m) move. (Guardian)

The Cherries are in talks with Roma about a signing Uruguay defender Matias Vina, 25. (90 min)

Chelsea have opened talks with Brazil defender Thiago Silva, 38, over a new contract with his current deal set to run out at the end of the season. (Athletic – subscription required)

Arsenal have also made an enquiry into McKennie’s availability. (Gazzetto dello Sport – in Italian)

West Ham have made a loan move for Santos and Brazil forward Marcos Leonardo, 19, after injuries to Danny Ings and Gianluca Scamacca, but have seen the move rejected so far. (90 min)

Crystal Palace boss Patrick Vieira is becomingly increasingly frustrated by the club’s lack of activity in the January transfer window, with the Eagles yet to add to their squad. (Talksport) 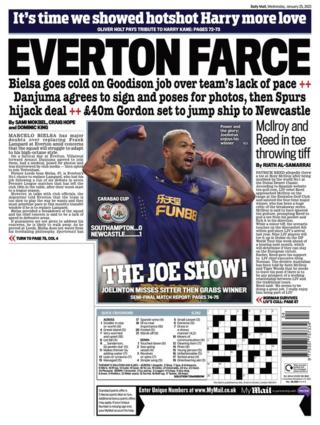 Chelsea’s £600m spree runs the risk of not delivering much