Spurs are closing in on a free transfer deal for Southampton and England goalkeeper Fraser Forster, 34. (Mail)

Erik ten Hag has made it clear that he wants Portugal forward Cristiano Ronaldo, 37, to remain at Manchester United for another season. (Metro)

The Gunners will try to sell as many as seven first-team players this summer including Spanish full-back Hector Bellerin, 27, and German goalkeeper Bernd Leno, 30. (Sun)

Juventus have stepped up their attempt to sign Arsenal’s Brazilian defender Gabriel, 24. (Mirror)

Napoli boss Luciano Spalletti has doubled down on his stance that the club cannot afford to sell 30-year-old Chelsea target and Senegal international Kalidou Koulibaly. (Star)

Marcos Alonso, 31, will ask to leave Chelsea with an agreement already in place for the Spain left-back to join Barcelona. (Sport – in Spanish)

Everton and Leicester have joined the race for Burnley and England centre-back James Tarkowski, 29. (90 min)

The Toffees have offered Tarkowski a £120,000-per-week contract. (Football Insider)

Chelsea defender Andreas Christensen, 26, will be announced as a Barcelona player in the coming days. His contract at Stamford Bridge runs out in June. (AS – in Spanish)

A furious David Moyes has once again hinted at a summer of significant overhaul despite West Ham’s encouraging season. (Standard) 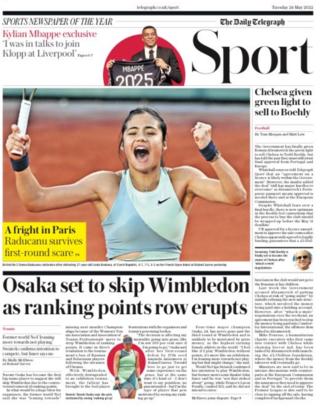