Newcastle have offered Benfica 60m euros (£50m) for Uruguay striker Darwin Nunez, 22, to try to fend off a queue of Premier League rivals vying to sign him. (Footmercato – in French)

Coach Maurizio Sarri is desperate for a reunion with Jorginho at Lazio, with the Italy midfielder, 30, unlikely to be offered a new contract at Chelsea beyond 2023. (90min)

Arsenal are interested in signing Hoffenheim’s Austria midfielder Florian Grillitsch, 26, on a free transfer this summer. (Telegraph, via Metro)

Leeds United have joined Arsenal and Newcastle United in expressing an interest in Grillitsch. (Mail)

Tottenham will be in the market for a left-sided centre-back this summer and are monitoring the situation of Spain defender Mario Hermoso, 26, at Atletico Madrid. (Mail)

Borussia Dortmund have reached a basic agreement with Red Bull Salzburg over signing Karim Adeyemi but the Germany forward, 20, is still in talks with Liverpool, RB Leipzig and Paris St-Germain. (Sky Sport Germany – in German)

Barcelona have stepped up their pursuit of Chelsea captain Cesar Azpilicueta, 32, with the Spain defender pushing to leave amid ongoing financial uncertainty at Stamford Bridge. (Sport – in Spanish)

Paolo Dybala, 28, is planning talks with both Arsenal and Tottenham as the Argentina forward’s contract at Juventus is due to expire in the summer (Express, via Corriere Dello Sport)

A long list of European and Premier League clubs are lining up to bid for Torino’s Brazilian centre-back Gleison Bremer, with Arsenal, Leicester, Everton and Newcastle having contacted the Serie A club. Tottenham and Atletico Madrid have sent scouts to Turin, and Bayern Munich and Borussia Dortmund are also monitoring the 25-year-old. (Gazzetta Dello Sport – in Italian)

Belgium midfielder Eden Hazard, 31, does not want to leave Real Madrid this summer, despite Arsenal, AC Milan and Borussia Dortmund being cited as potential buyers. (RTBF, via RTL Sport – in French)

Manchester City are still pursuing Erling Braut Haaland, 21, but would prefer to avoid triggering the Norway striker’s £63m release clause, which they would have to pay in one lump sum. Instead they want to agree a deal with Borussia Dortmund which would see them pay more but over more than one payment. (90min)

The Gunners’ Brazil defender Gabriel Magalhaes, 24, says he is happy and focused at the Emirates, amid rumours of Barcelona interest. (Fabrizio Romano)

Fenerbahce and Galatasaray want to sign Al Rayyan’s James Rodriguez this summer but the Colombia winger, 30, is interested in joining Atletico Madrid. (FotoMac, via Mundo Deportivo – in Spanish) 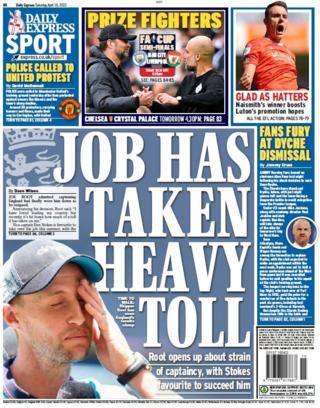 ‘I wouldn’t recognise him’ – Hodgson on new Watford boss Edwards