Manchester United have told Barcelona and Netherlands midfielder Frenkie de Jong, 25, they will turn their attention elsewhere if he cannot decide whether he wants to come to Old Trafford this summer. (Sport – in Spanish)

Monaco midfielder Aurelien Tchouameni’s proposed move to Real Madrid has been held up due to a tax issue. The La Liga champions are prepared to pay around 80m euros (£68m) for the 22-year-old French international. (ESPN)

Manchester United, Liverpool, Arsenal and Chelsea are all keen on Tchouameni and will be ready to step in if his transfer to Madrid does not materialise. (Sun)

AC Milan want to tie Portugal forward Rafael Leao, 22, down to a new deal to rebuff interest from Real Madrid. The Spanish side are looking for a forward after French international Kylian Mbappe, 23, pledged his future to Paris St-Germain. (La Gazzetta dello Sport in Italian)

Everton forward Richarlison, 25, could leave Goodison Park this summer with Tottenham, Real Madrid and Paris St-Germain all keen on the Brazil international. (Mail)

Everton are competing with West Ham to sign Burnley and Ivory Coast forward Maxwel Cornet, 25, after the Clarets’ relegation from the Premier League. (Telegraph, subscription required)

Tottenham captain Harry Kane is ready to open talks on a new contract with the club, despite the 28-year-old England striker pushing for a move to Manchester City last summer. (Evening Standard)

Inter Milan are hoping to sign Henrikh Mkhitaryan, 33, when his current deal with Roma ends in the summer. The Armenia midfielder is also considering an offer from the Europa Conference League winners. (Fabrizio Romano)

Leicester City are set to give Northern Ireland defender Jonny Evans, 34, a new one-year deal. However, they will listen to offers for Denmark centre-back Jannik Vestergaard, 29, and French midfielder Boubakary Soumare, 23, as Brendan Rodgers looks to shake up his squad. (Mail)

Paris St-Germain will not sign Barcelona winger Ousmane Dembele, 25, this summer despite the French international being heavily linked with a return to his homeland. (Le Parisien – in French, subscription required)

Paul Pogba’s barber has dropped a clue on Instagram about the 29-year-old midfielder’s future, suggesting the Frenchman will rejoin Juventus when his contract at Manchester United expires in the summer. (Manchester Evening News)

Fiorentina are struggling to agree a deal to sign Arsenal midfielder Lucas Torreira. The Uruguay midfielder, 26, has impressed on loan with the Italian side who are hoping the Gunners will reduce their £12.5m asking price. (Evening Standard) 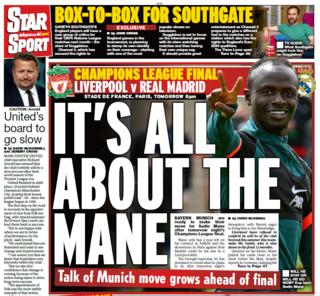