Two-and-half years ago Steve Clarke’s Scotland tenure was already in serious jeopardy after only five games.

His team looked solid and structured for 55 minutes in Moscow against an efficient, if unspectacular, Russia side before conceding four goals in 27 minutes in a remarkable collapse.

Embarrassing. Folded like a pack of cards. Miles off what is needed at international level. Those were just some of the utterings from pundits after that 4-0 defeat.

Clarke himself was rocked by the display, saying: “We have to make sure this is the lowest of the low.”

Thankfully for the Tartan Army, it was. Clarke reshaped, rebuilt and galvanised a national team that was previously consumed by failure and doubt.

Scotland are two games away from a first World Cup since 1998, which would be a second consecutive major tournament having ended their 23-year hiatus at Euro 2020 last year.

The Moscow defeat seems a lifetime ago and, though it was a forgettable night, proved to be the moment from which the past 30 months of relative success were born.

“That hurt me,” Clarke said of the loss on the High Performance Podcast earlier this year. “I started to question myself a little bit and I was thinking, ‘what am I going to do?'”

After seeing out the final three games of that failed European Championship qualifying campaign in November 2019, Clarke had until March of the following year to get things right before the play-off semi-final against Israel, which had been secured under his predecessor Alex McLeish via the Nations League.

As it turned out, Covid-19 shut down the country and delayed the fixture by eight months, but as soon as the previous campaign ended Clarke was working out solutions.

The number one priority was to shore up a leaky defence. The former Chelsea full-back had already picked four different back-four combinations in his five matches, conceding 14 goals.

Clarke told the High Performance Podcast: “I phoned my coaches and said, ‘we can’t go back four’. I’d never coached a back three in my life, so it was a change for me.

“We had two of the best left-backs in world football in [Kieran] Tierney and [Andy] Robertson. We’ve got to get them both in the same team, it’s not easy.

“My idea was to play Tierney as one of them [centre-backs] and I had this mad idea Scott McTominay could play as another one.”

The 3-4-2-1 formation has since been the bedrock of Scotland’s resurgence, but Clarke had to convince some players to play in unnatural positions, and Tierney held the key to making it a success.

“I had a really good conversation to tell him he was going to be the best left centre-back Scotland had ever had,” Clarke said.

“He thought he was a better left-back than Andy Robertson. There’s not a cigarette paper between them, they’re both fantastic players.

“I trusted Kieran to play centre-back. But I had to sell it to him. He asked a lot of really good questions. I told him I loved him and I wanted him to play that position. That was a big part of moving the team forward.”

Tierney was not the only player Clarke had to have a talk with. Unconvinced by his attacking options, he wanted Australian national Lyndon Dykes, whose parents are Scottish, on board.

He explained: “I said to Lyndon, ‘I don’t know if you feel Scottish or Australian. Only you can decide. I’m telling you this is what we have on the national team, this is your competition.

“‘But you have to decide whether you want to play for Scotland or Australia. I can’t see inside your mind’.

“He phoned me back and said, ‘I’m Scottish. My wife’s Scottish, my daughter’s Scottish. I want to play’.”

Dykes has since scored six times in 21 caps, including four in World Cup qualification to ensure Scotland booked a play-off berth against Ukraine. Clarke’s powers of persuasion proved a masterstroke.

But it was not all plain sailing. The shift to a back three had teething problems.

The unconvincing 2-1 Nations League win away to Czech Republic, who could not play any of their best players due to Covid, was Scotland’s second time using the new system and Clarke was concerned enough to consult some senior players about it after that game.

“I wasn’t convinced that they were buying into it,” he said. “And every one of them told me, ‘nah, we like it. We feel good, it’s the most comfortable we’ve felt on the pitch for a long time.’. And we stuck with it.

“It was their identity and now that’s their team system and shape. I think the little bit of success we’ve had grew from there.”

Even then, however, there was another major psychological barrier to overcome.

Scotland’s two-decade wait for a major tournament had become a millstone around every player’s neck.

The fatalism was something Clarke underestimated and, after following the Russia defeat with a 6-0 victory against San Marino, he set about trying to change things in the last two games of the failed European qualifying campaign.

“It’s not until you suffer that first run of games that you realise there is a problem,” he said.

“We needed to find a way to change this losing mentality where we just turn up, get beat, get knocked out and go to the next tournament and the manager gets sacked.”

Narrow wins against Cyprus and Kazakhstan followed, but it was that testing victory against the severely depleted Czechs the next year that Clarke took heart from.

“[We won] 2-1, lucky, hanging on at the end. We came in after that game and everyone was sitting in the dressing room like pffff. I’m saying, ‘guys we won the game’.

“And the character we showed in the last 10 minutes, making saves, blocking shots, getting back to cover for their mate. Everybody dying to make sure we got that result.

The mark of how far the squad’s confidence had improved was illustrated in the play-off final against Serbia.

Conceding a 90th-minute equaliser after an impressive performance was a classic kick in the guts, and a familiar tale of gallant losers was forming.

“After that we come together as a group, and you’re worried for them,” Clarke admitted.

“But I start to hear the voices – the Robertsons, the McGinns, Ryan Jack, Callum McGregor, and there was a determination, ‘lads, we’re not out. We’re still in with a chance to go through. Let’s make sure the next 30 minutes we give everything on the pitch and we get there’.

“I didn’t have to say too much. They did it. We’ve got so many good people in the squad. That has been a process – getting good people in and selling the idea we can be successful.”

The rest is history as Scotland triumphed on penalties to reach the Euros, and though the tournament itself was underwhelming, the momentum carried on to the World Cup qualifying campaign.

A win away in Austria, a last-minute triumph over Israel and a vibrant 2-0 win against runaway group winners Denmark have formed part of an eight-game unbeaten run.

The task to go to Qatar is still considerable with Ukraine and then Wales in the way, but Scotland are a team transformed. And if they do reach the World Cup, very few people will think back to that dreadful night in Moscow.

The night where everything changed. 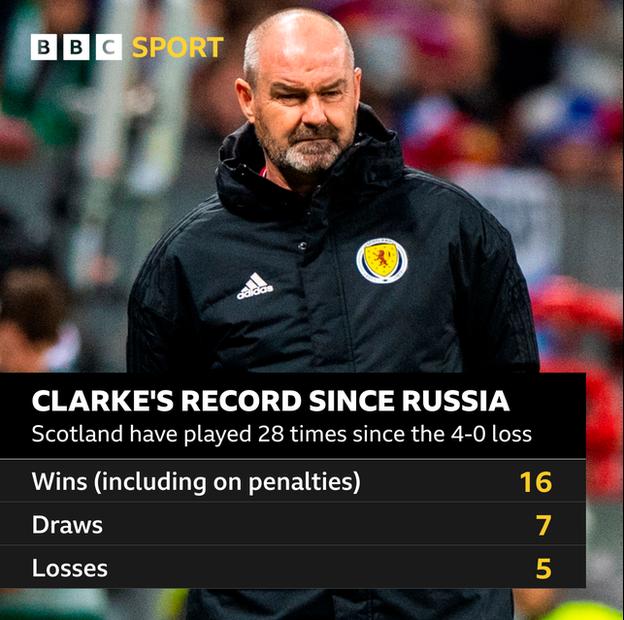 Liverpool aim to show club back where it belongs in WSL