The league leaders in England and Spain are set to go head-to-head in the semi-finals of the Champions League, as Manchester City prepare to welcome Real Madrid to Etihad Stadium.

Tuesday’s first leg will see the two star-studded sides aim to put themselves in a strong position to reach the final in Paris next month, before the return match, in Madrid on 4 May.

Both City manager Pep Guardiola and Real’s Carlo Ancelotti will have selection headaches to consider – and the task of choosing a mixed XI is certainly no easy feat.

We asked you to pick a combined XI and below you can see the side you selected. Manchester City’s Kevin de Bruyne was the most-picked player, featuring in 98% of sides, with Real Madrid centre forward Karim Benzema not far behind on 96%. 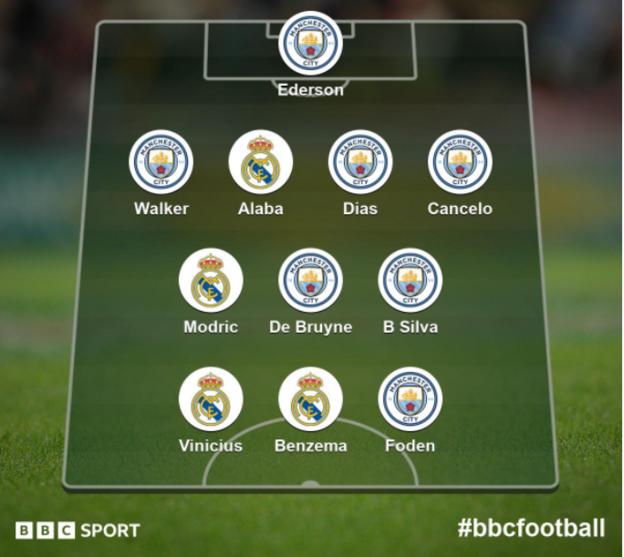 It is a massively-attacking line-up you picked with Luka Modric (79%) and Bernardo Silva (36%) alongside De Bruyne, while either side of Benzema up front is Phil Foden (58%) and Vinicius Jr (56%).

You can still choose your combined XI below and don’t forget to share it on social media using #bbcfootball.