England boss Gareth Southgate praised Harry Kane’s “exceptional” performance and his side’s resilience as they came from behind to draw in Germany.

Captain Kane scored his 50th goal for his country with an 88th-minute penalty to ensure a 1-1 draw in the Nations League Group A3 match in Munich.

England had been set to lose successive games for the first time since 2018.

“We challenged the players with that – a top team doesn’t go and lose two on the bounce,” said Southgate.

“We’ve had some good results at Wembley but we wanted to come away from home and get a good result. It’s so important we bounce back from a disappointing result.”

England, runners-up in in last summer’s Euro 2020 and semi-finalists at the 2018 World Cup, now have one point from their opening two Nations League matches after losing 1-0 in Hungary on Saturday. 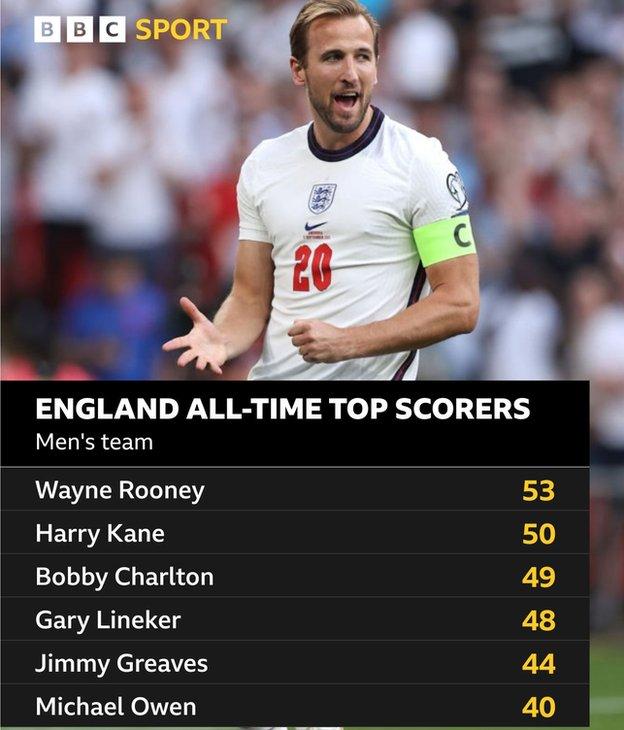 “Rightly, the fact he has 50 goals will be the centre part of the story but his all-round game, the way he led the line, the way he competed, the way he pressed from the front for us today was exceptional,” said Southgate.

“His quality to drop deep, I know people say he drops too deep, but you need a player that can come and link the game. He gives us so many options.

“When you had runners past him like Raheem [Sterling], Bukayo [Saka] and Mason [Mount], then that part of his game comes into its own. There are little moments when he takes the ball and relieves the pressure, which you take for granted, but are an important part of his game.”

Southgate was also pleased with the way his players “put their bodies on the line for each other”.

England and Newcastle full-back Kieran Trippier, who played alongside Kane when the pair were at Tottenham, also praised the centre-forward.

“Harry Kane stepped up as always, he is special,” said Trippier. “I used to play with him for club and country. Fifty goals is incredible. He’s a top pro and a great leader.

“This is a positive result. The substitutes made a huge impact. We’ll review the game and look forward to the next one.”

England have two home games coming up in the Nations League, both at Wolves’ Molineux ground – against Italy on Saturday and Hungary on Tuesday, 14 June.