Surprisingly not in Portugal‘s starting XI for their opening World Cup game, a 3-2 win against Ghana, it only took forward Rafael Leao three minutes after coming off the substitutes’ bench to offer up the kind of defining action he’s done time and again for AC Milan over recent seasons.

With Portugal 2-1 up and Ghana pushing forward in search of the equaliser, the 23-year-old popped up on the left wing to slot home a Bruno Fernandes pass in the 80th minute — neatly struck between defenders into the far corner with his right foot after he had opened up his body.

Yet as the cameo against Ghana marked only his 12th senior cap for Portugal, as well as his first goal for his country, Leao’s growing reputation has largely been built at club level. Always regarded as an extraordinary talent, he was considered one of the top prospects in the youth ranks at Sporting CP, which is some acclaim for such a prestigious academy system that has produced the likes of Cristiano Ronaldo, Nani and Ricardo Quaresma.

However, after scoring two goals in five games for the senior side, Leao was one of a number of players attacked by supporters at Sporting’s training ground. As a result, he joined many of his teammates by terminating his contract in the summer of 2018 and the forward signed for Lille on free transfer. Sporting claimed they were due his €45m release clause and took the player and the French club to the Court of Arbitration for Sport, where they were eventually awarded €16.5m, but an appeal is ongoing.

Tor-Kristian Karlsen is a Norwegian football scout and executive and is the former chief executive and sporting director at AS Monaco. He will write regularly for ESPN on the business of soccer and the process of scouting.

Leao then joined AC Milan in 2019 for €35m and it was under coach Stefano Pioli’s guidance that he added the tactical discipline, maturity and overall consistency to make the step up from an occasional impact player to a full-fledged Serie A star.

Though signed as a centre-forward, Pioli took a slightly different view on the attacker — whose technical profile makes him an option all across the front line — by shifting him onto the left side. With his startling pace, ability to leave defenders for dead with a sudden burst of speed, and sharp dribbling skills, Leao was given a chance to thrive in wide areas rather than in the crowded middle where his undeveloped hold-up play would be exposed.

And while his impact wasn’t immediate after the switch — he still had to deal with periods of adverse form, the odd night of excessive confidence in own ability and lack of end product — the Portuguese repaid his coach by chipping in with 11 goals and 10 assists in 35 Serie A games during last season’s Scudetto-winning campaign.

While high-scoring forwards or wingers are no rarity in the modern game, it’s Leao’s blend of abilities that gives him an extra edge. In addition to exceptional speed and tremendous body strength, athleticism and coordination — which allows for rapid turns and makes him hard to knock off balance — his ball control is also of a high standard. He can beat a marker in either direction through quick footwork, stepovers or body feints (last season he averaged a stunning 5.5 successful dribbles per game), while his off-the-ball running is carried out with conviction to take advantage of space in behind the defence. 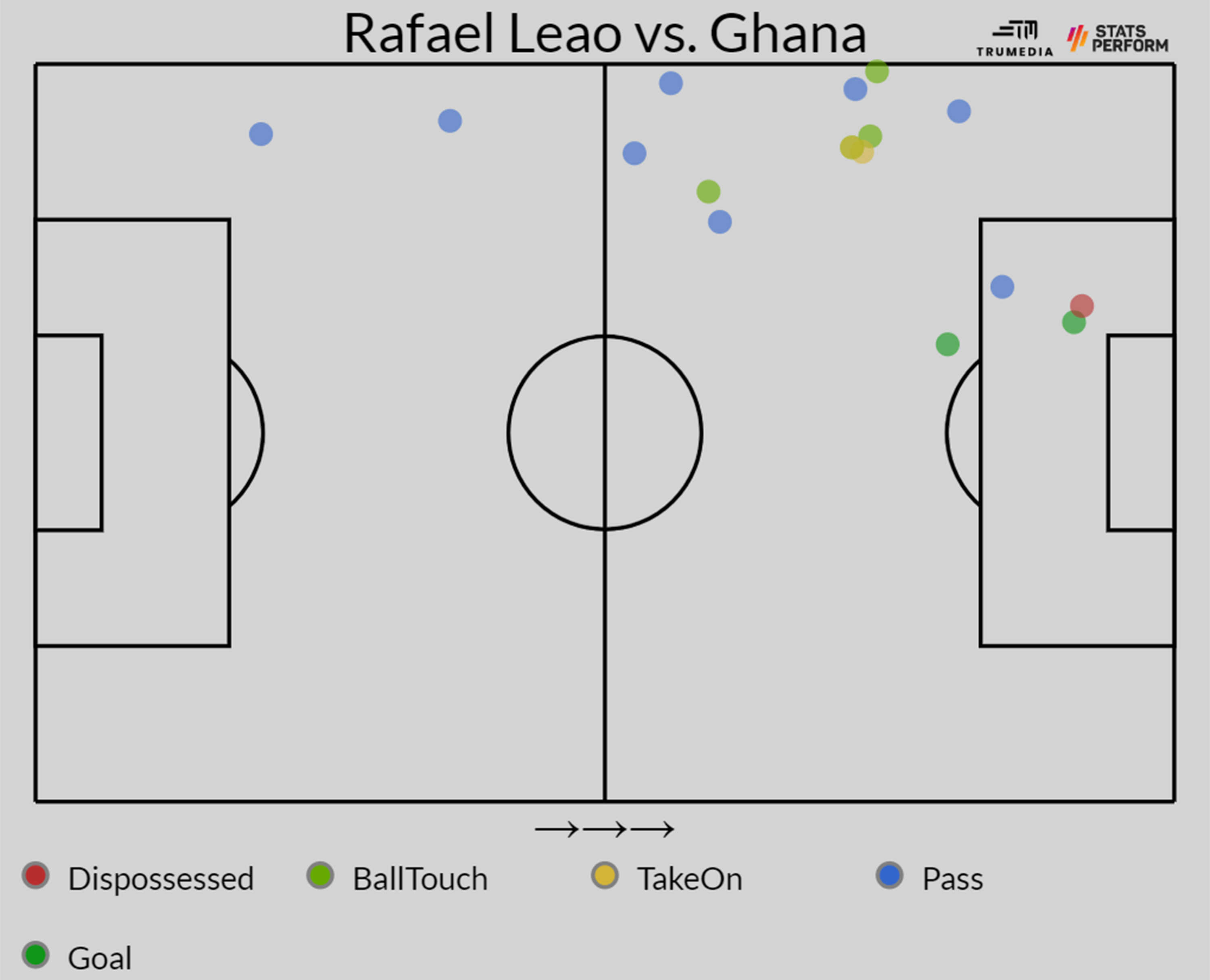 Much like the effort against Ghana, the majority of Leao’s goals tend to come from cutting inside from the left — either by simply outpacing the full-back or exploiting the space between right-back and centre-back before curling the ball into the opposite corner in a Thierry Henry-esque manner. A powerful shot allows him to test the goalkeeper from distance (45% of his efforts ended up on target last season) and he can also find the net with his left foot. 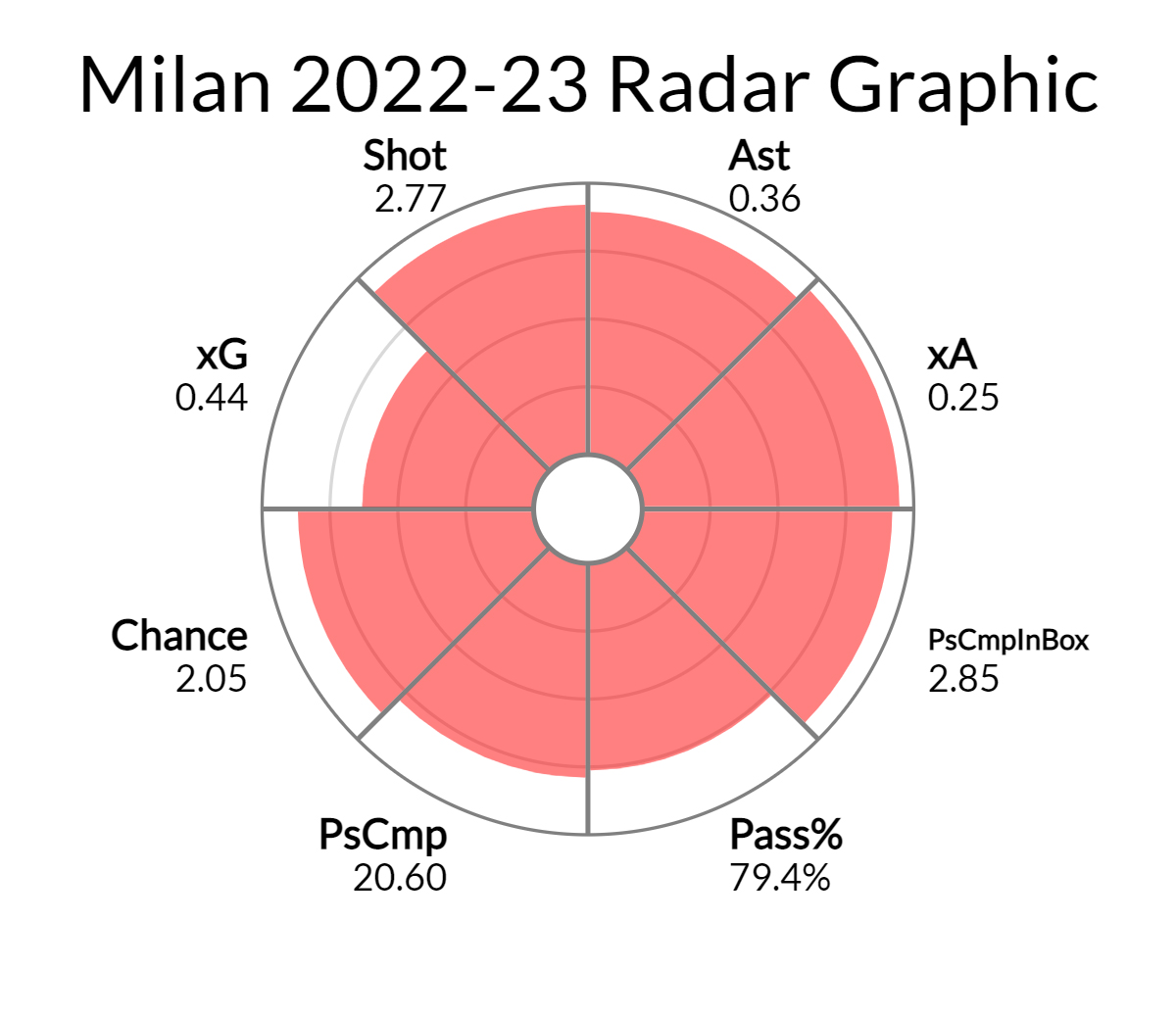 Amid all his individual ability, Leao’s collective contribution also deserves a mention. If his running with the ball doesn’t result in a cut-back for the central striker or a deep running midfielder (or even a square pass to the opposite forward) the way he stretches opposing defences generates space elsewhere and he often ties up more than one opposing defender. Moreover, his defensive contribution keeps improving; this season he has recovered possession 1.5 times per game.

While Ronaldo is a hard act to follow for Portugal, Leao does offer some of the same attributes sported by the 37-year-old legend in his prime and, thanks to his rapid development over the past 18 months, he is arguably the most-coveted attacking player among the elite clubs in world football.

Paris Saint-Germain are reported to be long-standing admirers — Luis Campos, their new sporting director, was responsible for taking him to Lille in 2018 — while Real Madrid, Chelsea and Manchester United are also frequently mentioned as keen suitors of the forward, who reportedly has a €150m release clause.

With his contract expiring in 2024, Milan’s sporting director Paolo Maldini recently revealed that the club had set a target of wrapping up the extension of their young star’s contract in time for the World Cup. However, in failing to do so the Italian side are now faced with the delicate predicament of having to listen to potential offers in January or ending up negotiating with their backs to the wall next summer knowing, he could leave for nothing 12 months later.

Leao has already impressed in his brief cameo in Qatar and, regardless of what follows, the exhilarating forward will remain a feature on the scouting shortlists of the powerhouses of European football for years to come.

Which World Cup records can Messi, Ronaldo break in Qatar?