Liverpool secured their place in the semi-finals of the Champions League with a 3-3 draw with Benfica at Anfield on Wednesday night.

Ibrahima Konate headed the Reds into the lead – just had he had in the first leg – following a Kostas Tsimikas corner, but Goncalo Ramos’s fizzed finish restored parity on the night soon after.

Diogo Jota teed up Roberto Firmino to restore the home side’s advantage 10 minutes after the break before the Brazilian rasped in another with a side-foot volley from a Tsimikas free-kick.

Benfica pulled another back when Roman Yaremchuk raced through and rounded Alisson Becker to net before Darwin Nunez made it all square on the evening, but the hosts moved into the last four 6-4 on aggregate.

Jürgen Klopp’s side will now meet Villarreal in the semi-final, with the first leg scheduled to two place at Anfield in two weeks’ time.

Joe Gomez, Konate and Tsimikas were named in defence, Naby Keita and James Milner returned in midfield and Luis Diaz and Firmino came back into the attack.

Ahead of kick off, Anfield paid tribute to the memory of the 97 children, women and men who died as a result of the Hillsborough disaster ahead of Friday’s anniversary.

When play got under way, it was Benfica who created the first opening with 13 minutes gone – Everton whistling a shot just past the post at the end of a counter-attack following a cleared Liverpool free-kick.

At the other end, a one-two between Jota and Firmino sent the former into space inside the box, but he was thwarted at his boots by Odisseas Vlachodimos.

The visiting ‘keeper was called into action once more soon after, this time preventing Milner from reaching Diaz’s low ball into the box before foiling Firmino’s attempted follow up.

But then, the breakthrough – and just as it had been at Estadio da Luz, it was Konate who claimed it.

The centre-back met Tsimikas’s out swinging corner from the left with a powerful downward header that found the corner.

The Portuguese side thought they’d claimed a leveller in the aftermath when Nunez chipped over the advancing Alisson Becker, but he was deemed offside.

Diaz then stung the gloves of Vlachodimos with a blast from just inside the area after skilfully side-stepping a challenge.

On the half-hour, Firmino had a close-range header deflected over by Jan Vertonghen after Diaz had nodded it back into the six-yard box from a corner as the Reds threatened to strengthen their grip on the tie. 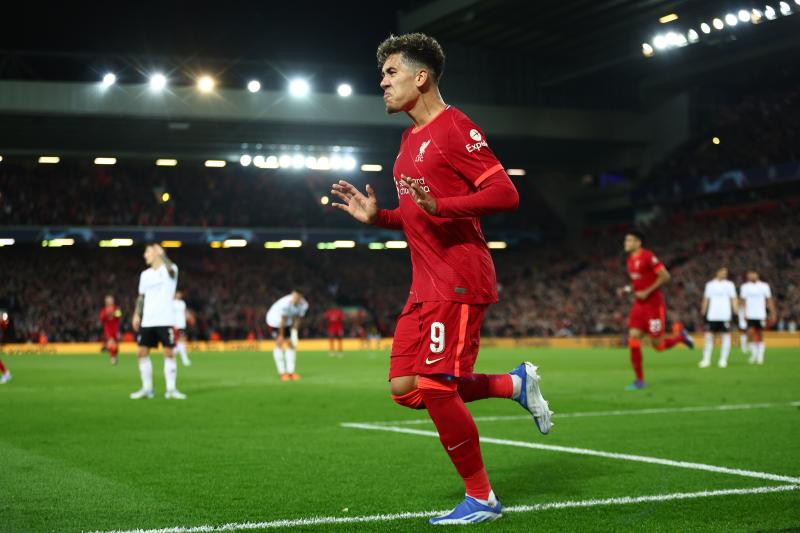 However, Benfica pulled a goal back when Goncalo Ramos rasped in from just inside the box after Milner’s challenge had deflected the ball into his path behind the home team’s defence.

Liverpool were close to going back in front with 37 played, but Alejandro Grimaldo got a toe to the ball as Diaz looked to tap in from Firmino’s square pass.

Next, with half-time looming, Keita took aim from just outside the area and watched his low shot narrowly evade the corner of the goal by a fraction before Gomez drilled into the midriff of Vlachodimos moments later.

The Reds went back in front within 10 minutes of the restart. Vlachodimos fumbled as he attempted to thwart Diaz at his feet. Vertonghen’s clearance was seized upon by Jota, who drilled the ball across the face of goal, enabling Firmino to tap in.

A trio of changes followed, with Thiago Alcantara, Fabinho and Mohamed Salah entering the action.

But it was Firmino who was on target again on 65. Tsimikas was the provider once more, with his free-kick from the left met on the volley with a thumping finish by the No.9.

However, Benfica weren’t done in the tie just yet. Yaremchuk reduced the arrears by rounding Alisson and rolling into the empty net before Nunez dinked over the Brazil ‘keeper to make it three apiece on the night with eight minutes remaining.

Alisson had to deny Nunez another, producing a fine save low to his right to keep out a crisply struck volley – and Liverpool saw off the late efforts of the Portuguese team to move into the last four for the third time in five seasons.