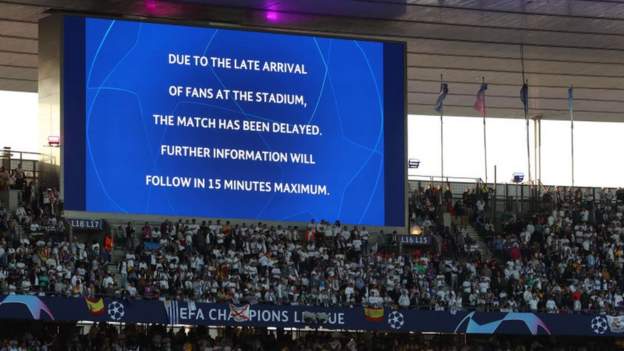 
Uefa delayed kick-off in the Champions League final between Liverpool and Real Madrid by more than 30 minutes because of “security reasons”.

The match at the Stade de France in Paris was scheduled to get under way at 20:00 BST but did not start until 20:36 BST.

Pictures emerged in the build-up of huge crowds of fans queuing to get in.

French police tweeted 20 minutes before game was scheduled to begin, urging fans not to force entry.

As kick-off approached, large areas of empty seats could still be seen inside the ground.

Outside, some fans were seen climbing perimeter fences or attempting to run past security. Riot police were also in attendance.

Liverpool players emerged to warm-up again at 20:06, with messages on the big screens inside the stadium stating the delay was because of the late arrival of fans.

“Supporters attempted to penetrate the stadium. They forced their way through the first filter. The screening at the Stade de France is watertight,” Reuters quoted French police saying in a statement.

Police outside the ground fired tear gas as a small number of fans tried to climb over security barriers.

BBC journalist Nick Parrott, who was outside the ground in a personal capacity, told BBC Radio 5 Live: “I have just been pepper sprayed for the first time in my life. I have been to the Champions League final before and I have never been pepper sprayed before.

“I was outside Gate Y which has been opening and closing repeatedly over the last hour and a half but nobody has been going through. The security staff on the other side advanced and sprayed pepper spray.”

The opening ceremony started at just after 20:20 BST before the game finally got under way 16 minutes later.

Some 10 minutes after kick-off, Football Supporters Europe said “thousands are still trapped outside the stadium, remaining calm in the face of a completely unreasonable situation”.

The body added: “Fans at the Champions League final bear no responsibility for tonight’s fiasco.”

BBC Sport’s John Watson, at the ground, said he had “passed hundreds of Liverpool fans queuing at entry gates an hour before kick-off and not being permitted entry”.

“I’m at a loss to understand the reasoning for the delay being the late arrival of fans.”

Liverpool West Derby MP Ian Byrne tweeted to say he had “endured one of the worst experiences in my life”, blaming Uefa for “horrendous security and organisation putting lives at risk”.

“I pray no fans have been injured because of the disgraceful lack of organisation and expertise,” he added.

Dominic King from the Daily Mail told BBC Radio 5 Live he had been speaking to supporters queueing to get into the stadium: “It came from nowhere. There has been no violence or antagonism, they are just dismayed by how the authorities have treated them.”

“We got told about 45 minutes before that our end was filled while there were thousands outside,” Liverpool fan Tyler, who spent £1,000 on his ticket, told BBC Radio 5 Live.

The final was originally to be played in St Petersburg but the city was stripped of the game following Russia’s invasion of Ukraine. 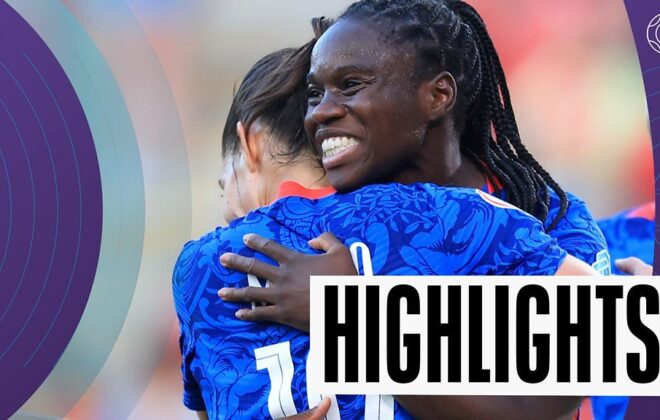 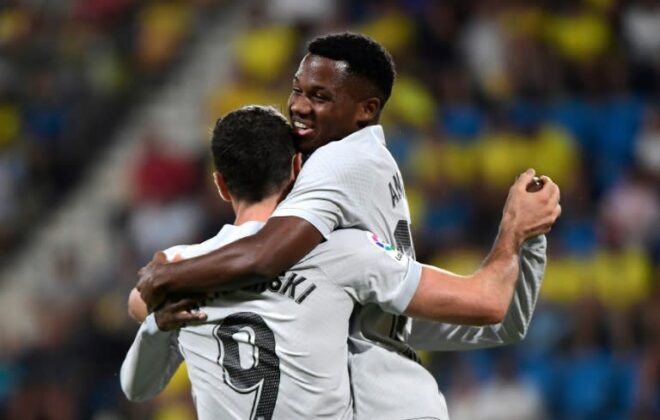 Match of the Day analysis: Almiron’s ‘goal of the season contender’