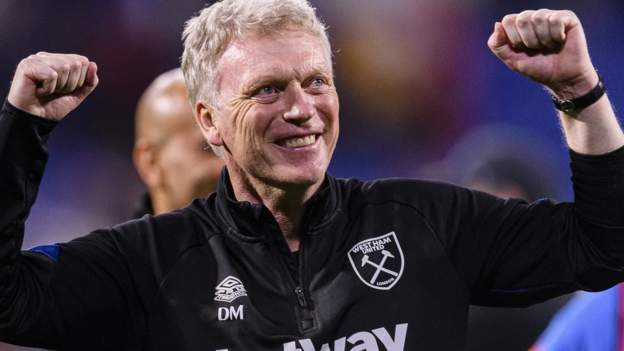 
West Ham should have no sense of inferiority when they aim to reach their first European final in 46 years, says manager David Moyes.

“We have got a good chance,” he told BBC Sport before the first leg of their Europa League semi-final with German side Eintracht Frankfurt on Thursday (20:00 BST).

“They are a really good side, who have put out a couple of big teams in this competition. But we have as well. I want us to feel positive about it and try and enjoy it as much as we can.

“We have to start getting used to it and thinking this is where we are supposed to be.”

It is the first time Moyes has reached the last four in Europe, having experienced knockout-stage exits earlier in his career at Everton and Manchester United. His only final as a top-flight manager came in 2009, when Everton were beaten by Chelsea in the FA Cup.

Now 59, Moyes took time out from preparations for the first leg at a sold-out London Stadium that are so detailed he has been working late into the night this week at Hammers’ Rush Green training complex, to speak exclusively to BBC Sport about his career in management, how the job has changed – and why he won’t go on as long as Roy Hodgson.

You had 19 months out of the game between being sacked by West Ham and returning. Did you think nights like this would return?

“I always hoped they would. But you need an opportunity. I didn’t think we should have been let go in the first place. Maybe if we had stayed, we would have been a couple of years further down the line than we are now.

“Thankfully the owners came back. I am really grateful to them. We can all make mistakes in life but they were big enough to come back and get me. I was really close to another Premier League job at that time. But when West Ham came in and wanted me back, I thought ‘no, I am having a go at that’. But the job I was given to keep the club up was even tougher than the first time. I feared it was going to be too difficult. Thankfully, we got through it.

“When I was at Manchester I would have liked to turn it around and do something quickly but over time, it has suited me better to build it, layer on layer, add a bit, next window, improve the team as you go along. That is what we did at Everton. That was a real build and showed exactly what I could do.

“I knew if I could be given a little bit of time at West Ham, there was so much room to improve. Loads of things had to be changed. I still think there is. But I have really good owners compared to what some of the clubs are putting up with just now. We have a great group of supporters who are right behind the team and are backing the club. That makes a huge difference.”

There has been criticism of West Ham’s recent recruitment, particularly in not buying a back-up striker for Michail Antonio. What would you say to this?

“The media plays a big part in it. They want clubs to spend money because it is news and there is plenty to write and speak about. But you are running a business, so you must do things correctly.

“There will be periods when you say ‘sorry, there isn’t anything out there to buy’. Recruitment is really important. It is easy to waste money and you will probably lose your job if you bring in signings that don’t work.

“If ever there was a year that showed spending money might not always be the way forward, this year would probably prove that.”

Between your time at Everton and West Ham, you had short spells at Manchester United, Real Sociedad and Sunderland. Did you doubt yourself during that time?

“A little bit at times. The United one, what a chance I had. That is a great club, with great traditions. I am sure someone, somewhere along the line, will turn them back into what they were. But I didn’t make it work. I couldn’t win enough games in the 10 months to give me more time.

“It would be a little bit unfair to put the other jobs in that category. Sociedad was a new challenge. Very few British managers get offered jobs in the big countries abroad. It was a great opportunity and we kept them up. Sunderland was really difficult. It has not been any easier for many years.”

You began your managerial career at Preston in 1998. You are now 59 and have been in charge for over 1,000 games. How long do you see yourself carrying on for?

“The biggest thing is your energy. A manager drives the club on from the inside through your energy. I am more experienced now, calmer. But the stresses of the job don’t get easier for sure. It takes a lot more out of you.

“Even with the media, you can never be sure exactly what you are having to deal with. I remember Sir Alex [Ferguson] saying there were lots of things happening and it was changing. He got to a point where he was fed up with some parts of it. That will happen in my era as well. But overall, I love football.

“It is something I really enjoy doing and I hope I continue to be successful at West Ham and they want to keep me. If not, I might continue doing it, I might not. But I don’t think I will manage as long as Sir Alex or Roy Hodgson.

“Think of your family. You are away most weekends travelling and in hotels. You don’t know if your games are Sundays, Fridays, Saturdays. There is very little regularity now if you are a football manager.”

But without day-to-day involvement in football, what would you do?

“When I was out of work, I wanted to re-educate myself. Uefa were very good and allowed me to go work for them. I did a lot of speaking at conferences for coaches. I saw that as something, maybe in the future.

“I like the thought of coach education to try and improve them and help young coaches. I am also getting nearer to an age where international football could be an interest but it is not quite there yet.

“I am really enjoying the job here. And while we are getting better and I see West Ham growing, I would like to get West Ham into a really good place before I consider anything else.” 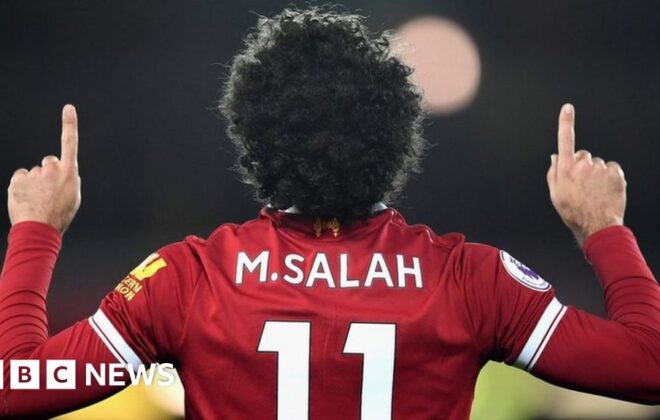 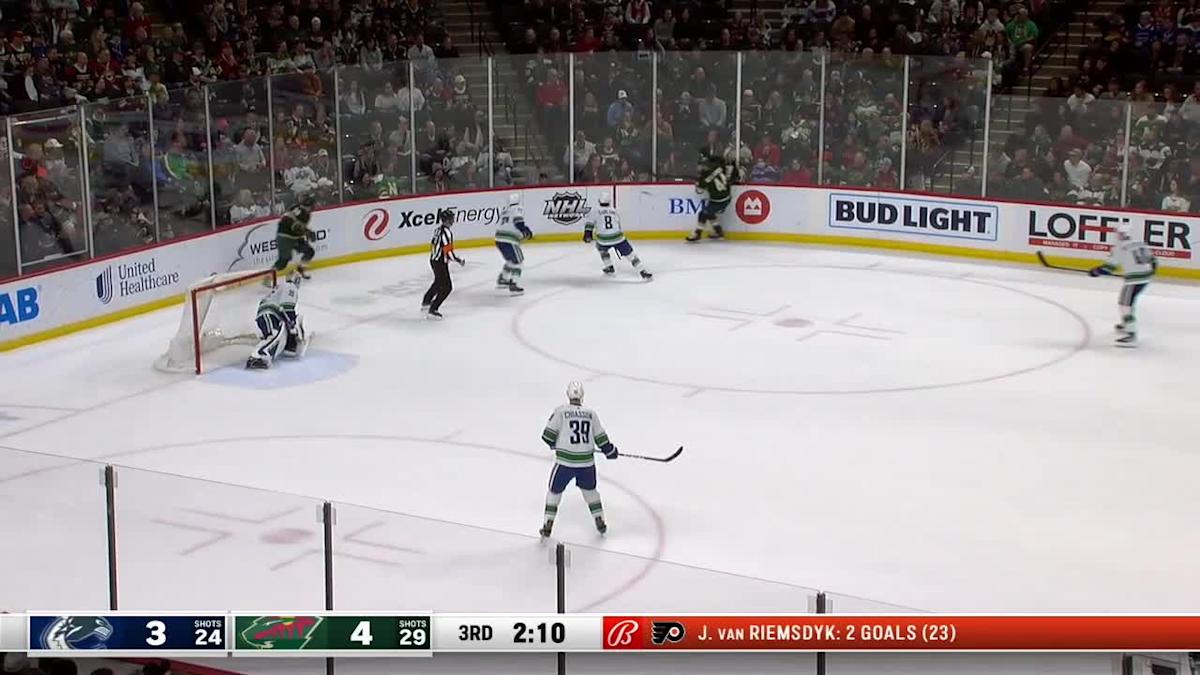 Kirill Kaprizov with a Goal vs. Vancouver Canucks 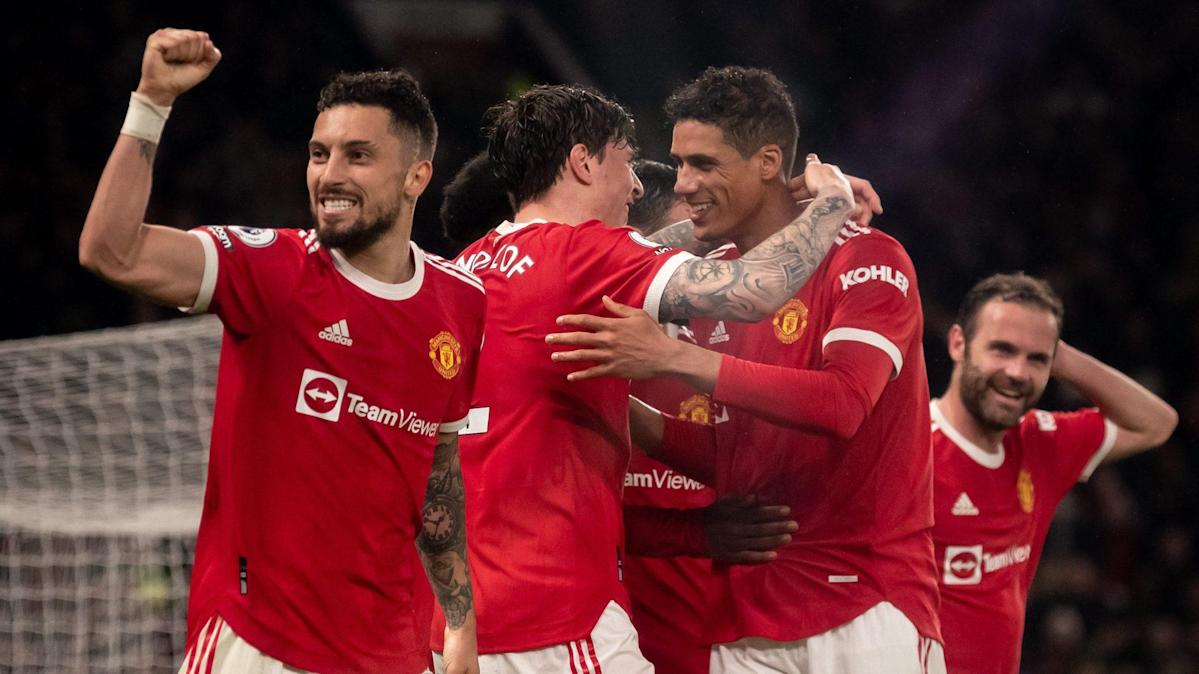