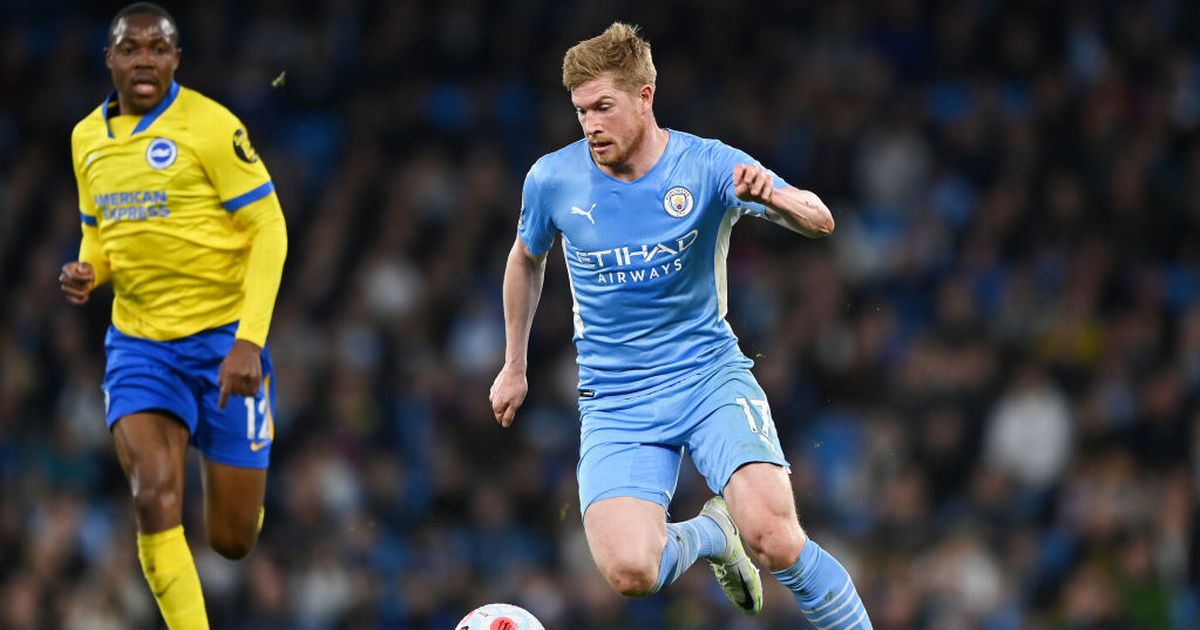 
Kevin De Bruyne is turning into Manchester City’s ultimate big-game hunter – and make no mistake, this clash with the feisty Seagulls WAS a big game. After Liverpool’s ruthless destruction of an abysmal Manchester United the night before, City needed a win, and if possible a statement win, that would take them back to the top of the Premier League.

For 45 minutes it looked like Graham Potter’s stubborn side were capable of giving the Merseysiders a huge advantage heading into the final six games of the season. De Bruyne took matters into his own hand with a trademark driving run that brought Riyad Mahrez his 23rd – and most important – goal of the campaign – and after Phil Foden had rifled in a second, the Belgian brilliantly teed up Bernardo Silva for a third that made inroads into Liverpool’s superior goal difference.

It was the kind of moment that Yaya Toure used to provide for the Blues at the sharp end of the season., all about powerful running, delicate touch and a brilliant football brain. He did not score but had a hand in two, and has already netted six times in his last eight appearances, including huge strikes against Liverpool and Atletico Madrid.

At the start of the season, and even a few weeks ago, it would have been fair to suppose that City had the easier of the two midweek fixtures, with rivals Liverpool facing a clash with old enemy Manchester United. But the Reds’ sorry demise meant that Brighton were far livelier and determined opposition and in contrast to Liverpool’s Anfield cake-walk the night before, City’s progress was halting and required considerable hard work.

Guardiola had urged his players to respond to the FA Cup semi-final defeat at the weekend by remembering the way they play football, perhaps a pointed comment on the second half against Atletico Madrid and the first half against Liverpool, when they definitely lost their way.

His players certainly did that in the opening 45 minutes against the Seagulls, driving forward, and finding space down both flanks, but with Brighton defending indepth and with plenty of ability and determination, they found chances hard to come by.

Riyad Mahrez, who had looked off the pace from the start, squandered the best of them, as a frantic City press forced goalkeeper Robert Sanchez to present him with the ball, just outside the box and with just one defender between him and the unguarded net. For once, and at precisely the wrong time, his legendary first touch deserted him, he took a second touch and the Brighton defence quickly slammed the door.

After Liverpool’s devastating start 24 hours earlier, it was a much tougher assignment against a team that was buoyed by victories at Tottenham and Arsenal in their last two outings. You could see how they managed that, defending extremely well and posing a threat on the break, to the extent that John Stones was City’s best player before half time.

City were finding it hard to break the visitors down, but when Kevin De Bruyne – back in action after missing Wembley with stitches in an ankle gash – combined sharply with Phil Foden, he whistled a shot narrowly past the post.

Close, but not close enough, and you could feel the tension mounting around the ground. The South Stand tried a rendition of the Bob Marley classic “Three Little Birds” to try to lift the mood, urging everyone “Don’t worry about a thing, ‘cos every little thing’s gonna be alright.” But it sounded like nervous uncertainty rather than a bold statement.

City were probing for weaknesses and switching the ball around in a bid to test the Seagulls’ endurance, but the normally-reliable Ilkay Gundogan drilled a shot straight at Lewis Dunk when Brighton were once again hurried into an error as they tried to play out of the high press.

Guardiola acted at half time, bringing on Ruben Dias, which not only gave the centre back much-needed minutes, but also allowed a tactical change, with John Stones going to right back and Joao Cancelo switching to the left.

Nathan Ake made way, and while he had been defensively sound in dealing with the livewire Tariq Lamptey, he offered little in an attacking sense.

It was a smart move that opened fresh options down the left, but the breakthrough goal came on the other side. With Brighton pushing, City won it back and Gundogan quickly and slickly found De Bruyne.

The Belgian was being hassled and harried by Moises Caicedo but the strength of his running is so important to City and he drove the ball deep into Seagulls’ territory. As two defenders converged. The ball broke to Mahrez and his shot deflected off Joel Veltman and looped into the net to bring a collective sigh of relief around the ground.

It was the Algeria international’s 23rd goal of the season, and one of his most important – the weight lifted off the Blues’ shoulders and they swarmed forward in search of a killer second.

It was Foden who found it, collecting a short corner and letting fly from 25 yards. Again City got the advantage of a deflection, the ball hitting Enock Mwepu to arrow into the far corner. The strike deserved a goal.

City were now in full flow, and the third goal was a thing of beauty. Sub Aleks Zinchenko – who went on to rapturous applause – swiftly intercepted Sanchez’s pass and instantly volleyed a pass to De Bruyne.

With uncanny awareness, De Bruyne touched the ball round the corner into the path of Bernardo, 20 yards out, and he swept it with effortless grace into the corner 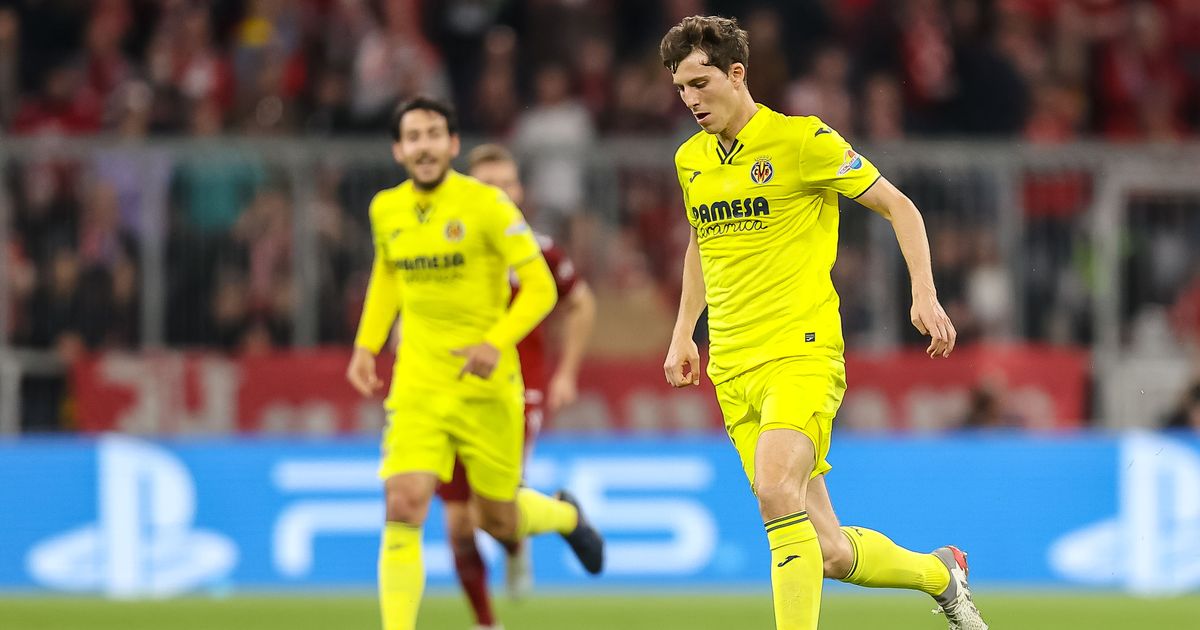 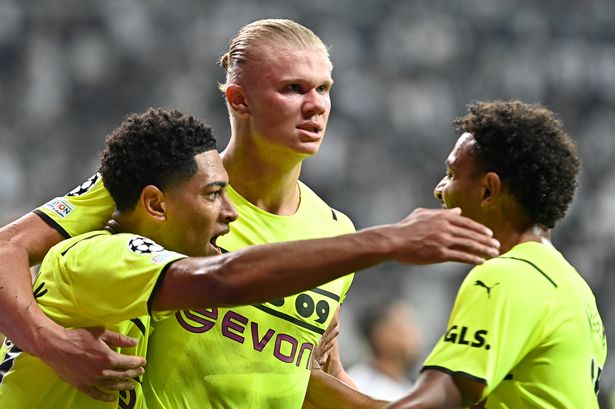 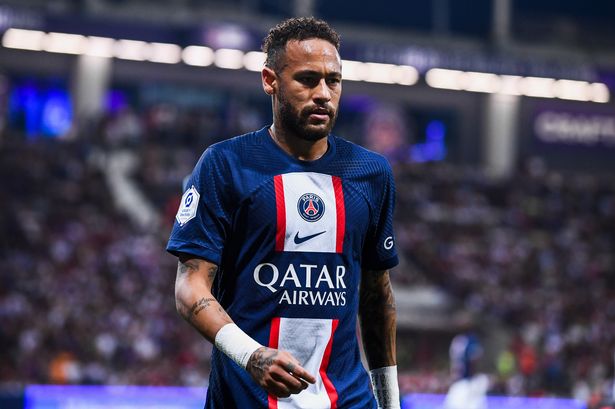