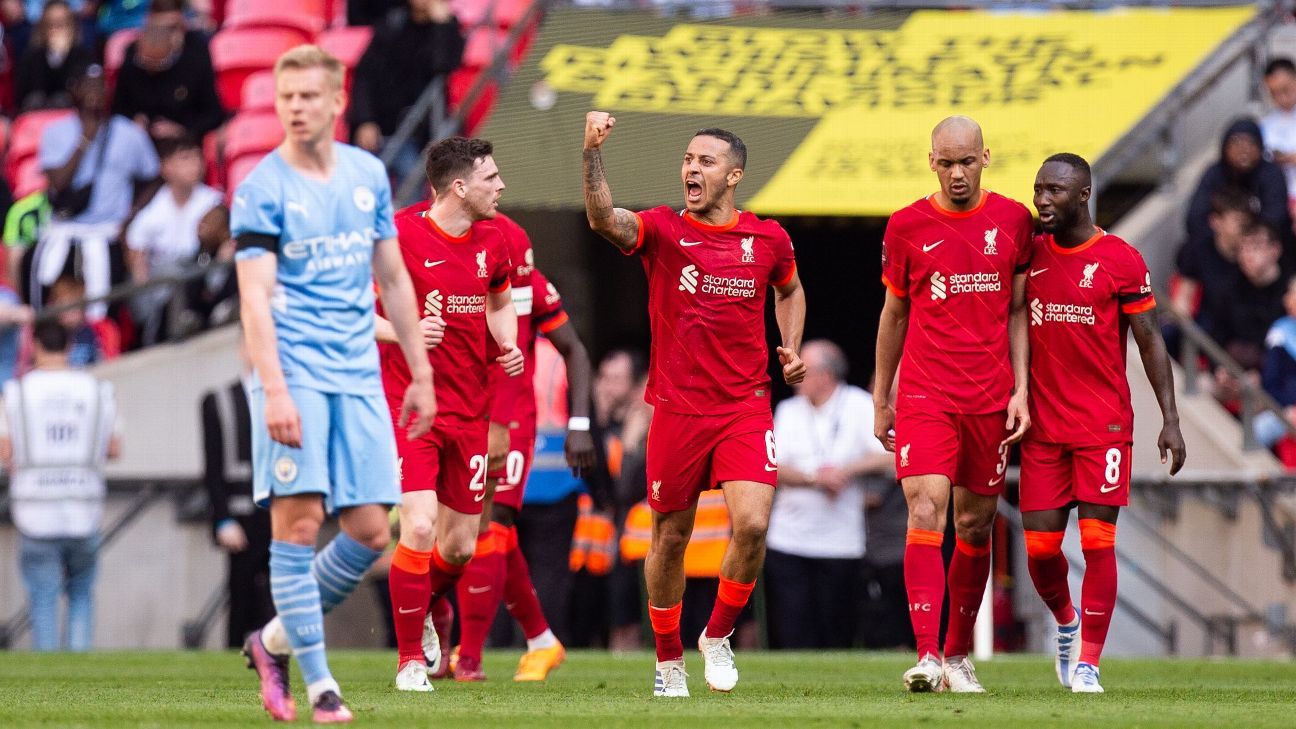 
What a weekend! With the FA Cup final set (it’ll be Liverpool vs. Chelsea on May 14, ESPN+) and several big clubs needing dramatic heroics to win, Europe’s top leagues did not disappoint. There’s drama in Serie A, another string of big results in the Bundesliga and a late comeback by Real Madrid against Sevilla that left fans speechless.

Here are James Olley, Bill Connelly, James Tyler and Alex Kirkland with what you need to know from around Europe.

Reds boss Jurgen Klopp doesn’t want anyone to talk about it, but Saturday’s FA Cup semifinal win over Manchester City takes Liverpool one step closer to an unprecedented quadruple. The Carabao Cup is already won, they sit one point behind City in the Premier League, and their two-legged Champions League semifinal against Villarreal begins a week on Wednesday.

Klopp has repeatedly expressed concerns over the tiring effects of a punishing fixture schedule, to the extent that he made the bizarre claim the quadruple had actually got harder by reaching the FA Cup final because it added another game to their calendar. But their 3-2 victory over City was secured with a devastating first-half display that suggests they’re primed for taking on the ultimate run-in. Players have stepped up during Mohamed Salah‘s minor dip in form, including January signing Luis Diaz, and Thiago‘s fitness has added a fresh dimension to the midfield.

No English team has ever won all four major trophies in a single season, and if Liverpool needed any further motivation to become the first, bitter rivals Manchester United treble success of 1999 stands ahead of them as the most successful single campaign in the Premier League era. — Olley

RB Leipzig are back where they want to be

With a lightning-quick Tyler Adams-to-Christopher Nkunku-to-Dominik Szoboszlai-to-the-upper-corner progression, RB Leipzig took charge of third place in the Bundesliga. Sunday’s 1-0 win over Bayer Leverkusen gave them 29 points from 12 matches since the start of 2022 — they’ve lost just once in all competitions and have also reached the Europa League semifinals, beating Real Sociedad and Atalanta in the knockout rounds. After standing in 11th place as late as December, Leipzig’s surge has taken them back to where they’ve finished in recent seasons.

Considering the attacking prowess of both teams, this was a slow-building affair. The teams combined for just eight shot attempts in the first 60 minutes, just two of those belonging to RBL. But Szoboszlai’s nasty strike gave the patient Red Bulls a reasonably well-deserved advantage, and a strangely off-target Leverkusen couldn’t equalize.

Die Werkself have held their own since losing star Florian Wirtz to a long-term ACL injury in March. They’re still just one point ahead of Freiburg for fourth place and the final German spot in the Champions League. — Connelly

Two clamorous defensive lapses from Eder Militao gifted the home side a 2-0 lead, only for a second-half fightback with goals from substitutes Rodrygo and Nacho — either side of a Vinicius goal inexplicably ruled out for handball — and an added-time Karim Benzema winner. It was a result that all but sealed Madrid’s LaLiga title with a 15-point lead at the top, and a performance that was the perfect encapsulation of their season. — Kirkland

Milan sides taking Serie A race to the wire

Only Italy can rival the Premier League for a good title race this season, and theirs looks set to go down to the final game as the two clubs of Milan refuse to give up. (And, honestly, Napoli are only five points off the summit with just over a month to play.) This weekend, AC Milan and Inter both won on Friday — the former cruising past Genoa 2-0, the latter winning 3-1 at lowly Spezia — to remain first and second, though reigning champs Inter have a game in hand and are only two points back. (If this wasn’t sweet enough, the pair clash in midweek in the second leg of their Coppa Italia semifinal, having drawn 0-0 first time out.)

Much will be written about either side if they become champions: Milan boast 18 league titles but haven’t won it since 2010-11, while Inter somehow weathered last summer’s departures (Romelu Lukaku, Achraf Hakimi and even manager Antonio Conte) to remain in the top three all season, even leading the way all winter with just three defeats in the league (including against Milan). In short, this is one to keep an eye on as there are plenty of pyrotechnics ahead. — Tyler

Promel pummels one for Union Berlin

Union fans are running out of time to enjoy the buzzing, energetic presence of Grischa Promel, as it was announced in February he’s joining Hoffenheim on a free this summer. But goals like the one he uncorked on Sunday, in an impressive 2-0 home win over Eintracht Frankfurt, will endear him forever to the fans, especially if they remain on course for a top-six finish and European football next season.

Promel’s goal, the second after Taiwo Awoniyi‘s instinctive opener, was a full showcase of his skill. After chasing down an overhit Julian Ryerson cross and keeping the play alive, he was on the spot for the loose ball at the edge of the box and curled it beyond Jens Grahl. Pace, passion, persistence and power: They rarely get as good as this. — Tyler

Yet another young star scores for Borussia Dortmund

Not only did Borussia Dortmund’s latest wonderkid Tom Rothe make his Bundesliga debut at the age of 17 years and 169 days on Saturday against Wolfsburg, but he also scored on his debut on a 24th-minute corner kick.

Rothe’s goal set the tone for a rampant afternoon in front of 79,200 giddy fans at Signal Iduna Park. BVB also got goals from other nontraditional sources (Axel Witsel, Manuel Akanji, Emre Can) before Erling Haaland took over, scoring twice and giving Borussia Dortmund a dominant 6-1 win over their increasingly disappointing opponents.

Despite a massive run of injuries and some momentum-destroying defeats that have halted their title race before the April 23 head-to-head with Bayern Munich, BVB will likely cruise into a second-place finish in the Bundesliga. Despite Haaland’s impending departure, it appears Rothe may give them another hotshot youngster to lean on in the coming seasons. — Connelly

United States goalkeeper Zack Steffen had a difficult afternoon at Wembley: He had little chance of stopping Ibrahima Konate‘s header for the opener, and then he foolishly allowed Sadio Mane to tackle him when he stalled in distributing a routine back-pass, which made it 2-0. However there was little he could do about the Senegal international’s second strike, which handed Liverpool a 3-0 first-half lead they wouldn’t relinquish.

Everything about it is beautiful. What a goal 😍 pic.twitter.com/xPlL2tKC2y

All in all, it was a wonderful team move, featuring a raking cross-field pass from Trent Alexander-Arnold to Luis Diaz that enabled the Reds to beat City’s press before Thiago Alcantara chipped an excellent pass to Mane, who fired a superb first-time volley inside Steffen’s near post. It was the apotheosis of a first half in which Liverpool simply blew City away. — Olley

Two teams that should be worried

Rayo Vallecano began 2022 sitting fourth in LaLiga, ahead of both Barcelona and Atletico Madrid. Yet they’ve taken four of a possible 39 points since, enduring a 13-game winless streak that marks the joint-worst run in their top-flight history. It’s also relegation form, with Saturday’s 1-0 defeat at Alaves dropping them to 14th in the table. It looks like the bottom two (Alaves and Levante) will still go down despite wins this weekend, so that leaves Cadiz, Mallorca, Granada, Getafe and Rayo scrapping to avoid joining them. Five teams separated by six points.

Rayo’s lead means they should be fine, but you never know in this sport. They were unlucky losers at Alaves, but manager Andoni Iraola was once again left lamenting a failure to convert chances. “This is the First Division. You have to score goals,” he said, and he’s not wrong. It was a bad weekend for Rayo all-round: the relegation of the women’s team, once among Spain’s best, was also confirmed after a season of jaw-dropping mismanagement. — Kirkland

Hoffenheim’s Champions League hopes went from “diminished” to “just about dead” on Sunday after a meek 0-0 home draw with Greuther Furth. Sebastian Hoeness’ squad attempted 16 shots, but created little in the way of clear value until late, when Furth keeper Andreas Linde made a series of sharp saves to preserve the point.

“We are in a phase where we’re finding a few things difficult,” midfielder Christoph Baumgartner said after the match. He might be underselling it, too: Since a 1-0 win over Koln pulled them into fourth place on March 6, they’ve notched just two points, with two goals scored, from their last five matches.

Going scoreless against a Furth team that has allowed a league-high 72 goals to date represents a nadir, and it all but finishes off any hopes of a Champions League appearance. In fact, reaching any European competition might now be unlikely: Hoffenheim is now in eighth place, two behind Union Berlin in the battle for sixth place and a spot in the Europa Conference League. — Connelly

Shaka Hislop finds it bemusing that a struggling Man United side may yet qualify for the Champions League.

Anyone with a brain would agree that watching Man United these days is difficult going, especially as all the star arrivals of last summer portended a significant leap forward, only for the club to take a gigantic step back. The Ralf Rangnick era has yet to spark, but at least they can rely upon Cristiano Ronaldo when times are tough, right?

The Portugal star took his Premier League goal tally to 15 on Saturday — tied for third-best with Liverpool’s Diogo Jota, trailing only Salah (20) and Son Heung-Min (17) — with a hat-trick against visiting Norwich, and thanks to the Red Devils’ ongoing malaise, they needed all three of CR7’s goals to escape a humbling home letdown. After surging to a 2-0 lead in the opening half-hour, with Ronaldo calmly converting Anthony Elanga‘s cross for 1-0 and overpowering an overmatched Ben Gibson in the air for his second, Norwich were allowed back into the game either side of half-time, with Kieran Dowell heading home Teemu Pukki‘s cross in first-half injury time and then setting up Pukki for the equalizer minutes after the restart.

With doom and gloom in full display around Old Trafford, a dangerous free-kick presented Ronaldo with the chance to be the hero with 15 minutes remaining, and he did just that, dispatching the set piece beyond a flailing Tim Krul. Job done, then.

As their season stumbles to the finish line, Ronaldo’s second hat-trick in just over a month (sorry, Tottenham fans) is at least keeping United in the top-four conversation with six rounds remaining. They’re three points behind Spurs, but with four road games (Liverpool, Arsenal, Brighton, Crystal Palace) and home dates with Chelsea and Brentford to come, Ronaldo will need a few more days like Saturday if they’re to qualify for the 2022-23 Champions League. — Tyler 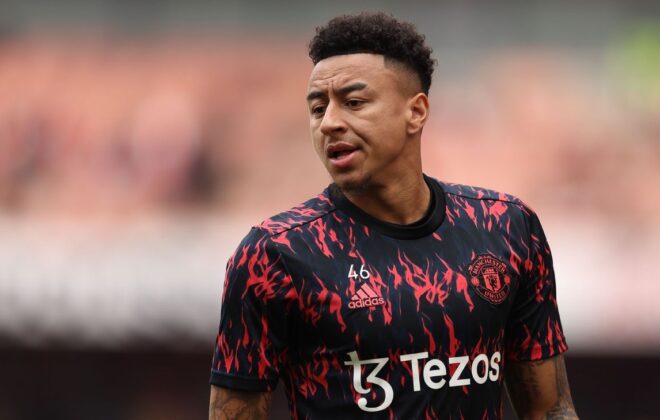 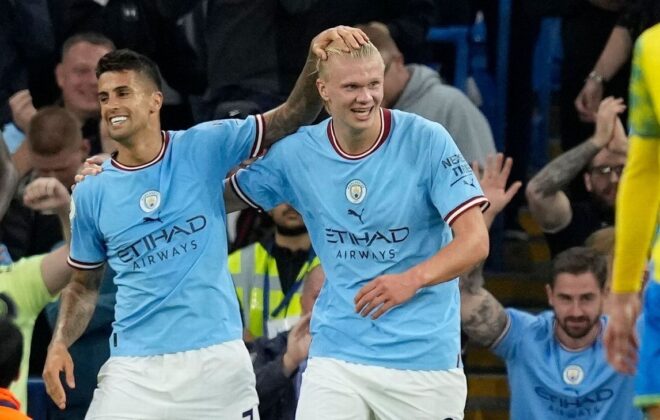 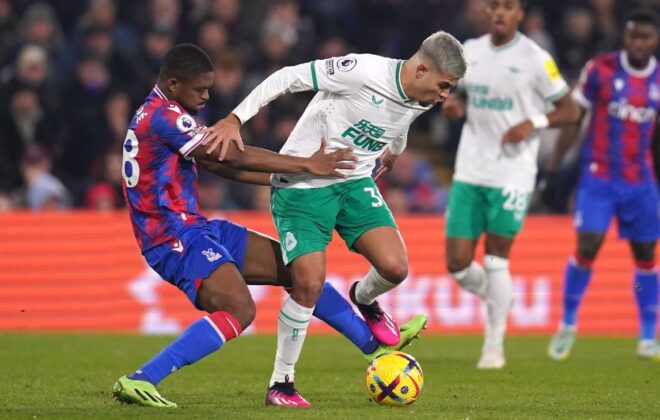