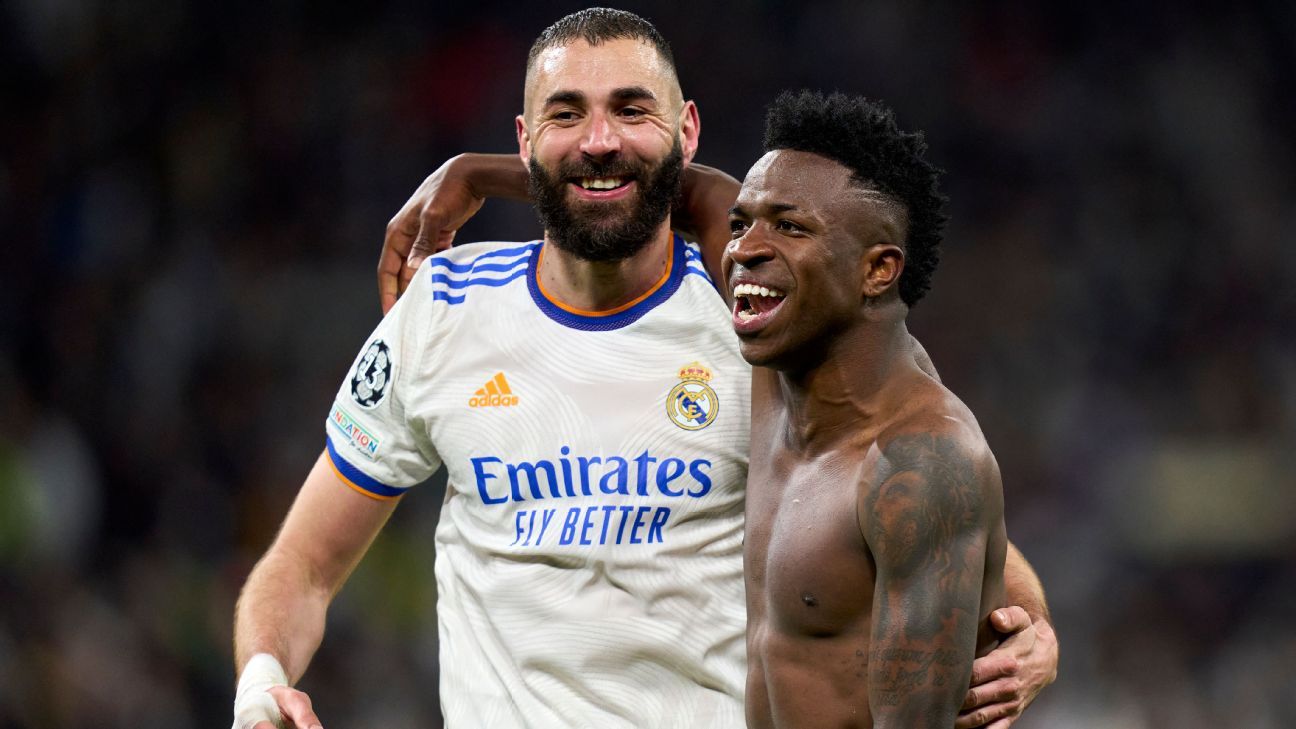 
When Real Madrid striker Karim Benzema finally wins his first Ballon d’Or, as he surely must in 2022, I sincerely hope that his first words are… “I have to thank Vinicius Jose Paixao de Oliveira Junior.”

Right now, Benzema is playing the most beautiful football of any player in any major league, and he’s been doing so since the beginning of the 2021-22 season. It’s not simply about the vast flood of goals he’s scoring during the most prolific few months of his entire career. It’s not even simply about the fact that he has taken Real Madrid’s capacity to be the all-time, comeback “don’t you dare write us off” kings of European football and added extra tungsten-tough unbeatability thanks to a string of improbable, admirable and unexpected goals.

Benzema makes football beautiful, in the truest sense of the word. Like great art, opera and cinema, watching him makes the senses soar. But anyone who doesn’t see the connection between his partnership with Vinicius, as searingly unlikely as it is, and the Frenchman’s elevation to a footballing level that surpasses anything he’s produced in his already sumptuous career hasn’t been paying proper attention — or doesn’t understand football.

Please tell me you were watching Real Madrid’s latest battle from 2-0 down to win 3-2 at Sevilla on Sunday (stream the replay on ESPN+ in the U.S.)? Although the arithmetic doesn’t yet support this claim, it was the victory that guaranteed Madrid will be champions of LaLiga. Moreover, it was a performance to warn Manchester City that despite them starting as favourites next week in the Champions League semifinal, Pep Guardiola’s English champions have been drawn against an altogether remarkable set of characters who couldn’t find the word “surrender” in a dictionary even if there were arrows pointing to it.

The culmination of Madrid’s comeback was a goal, exquisite in both creation and execution, that showed the 21-year-old Brazilian winger and the 34-year-old French winner at their best. Go back and watch the decisive fifth goal if you haven’t seen it: Vinicius sprints into a little gap where their seemed to be no room for his body, never mind for invention and anarchy, then conjures up a scooped, back-heel style pass to Rodrygo on the run, a cut-back from the youngster before Benzema measured up his angles and left a number of Sevilla men sprawling, drooling and wailing as he clipped home the winner.

I say again: Although the argument about Benzema’s greatness and the need for him to win this historic award is about the excelsior nature of his play and his partnership with Vinicius rather than pure stats, there’s no escaping the remarkable numbers the two men are generating.

When Benzema hit the net, defeated Sevilla and “clinched” what will be his fourth Spanish title, he put himself within six goals of overtaking Madrid’s all-time second-top scorer, the inimitable Raul Gonzalez Blanco. If the Frenchman keeps scoring at his current rate, he’ll achieve the feat and hit his 324th for Los Blancos approximately 150 games more quickly than the Spanish legend managed. That’s just off the charts.

In Seville, Benzema was also making it 86 goals that he and Vinicius have either scored or assisted for Real Madrid this season. That’s a jaw-dropping total given that it involves someone, Vinicius, whose highest goal total in any previous Spanish season was six. It’s a better total of goals and assists this season than Robert Lewandowski and Thomas Muller at Bayern Munich, Lionel Messi and Kylian Mbappe at Paris Saint-Germain, and nearly 30 better than Mohamed Salah and Sadio Mane at Liverpool.

With up to nine matches for Benzema and Vinicius still to play in Madrid’s colours this season, it’s already a better goal/assist total than in three of the seasons when the Frenchman was partnering Cristiano Ronaldo between 2009 and 2018.

Part of what makes this partnership so delicious is the joy of watching it. Benzema — suede-headed, canny and roaming freely around the final third of the pitch, given absolute freedom by his coach and given the ball whenever he demands it by the rest of his teammates — is showing every ounce and every inch of what he’s learned since making his debut for Lyon against Metz 17 years ago.

Vinicius is sometimes a bit gauche, sometimes a bit genius. Sporting a massive grin, bewitching technical skills, occasional irrationality and irascibility — all of it imbued with a “don’t make me angry by kicking me” personality, flooded with the pure enjoyment of putting an opponent in knots — he’s the kind of player who sells tickets and puts bums on seats.

But such partnerships aren’t usually made by opposites. As the old song goes: “You say po-tay-to, I say po-tah-to, let’s call the whole things off!” Not so long ago, Benzema wasn’t the only one in the Madrid squad whose patience was paper-thin because the Brazilian kid was so prone to mixing daftness with daring. He was just the one who was caught expressing it.

Picture the scene. It’s exactly 16 months ago, and Madrid are getting a chasing at Monchengladbach. Benzema, grumpy and dispirited, is stomping back out for the second half in the company of left-back Ferland Mendy. Unaware that he’s within range of pitch-side microphones, he’s caught saying “Mate, don’t give the ball to him, it’s like he’s playing for the other team!”

He’s talking about Vinicius, his 20-year-old teammate. A guy who needs support, counsel and coaxing, but who’s getting an earful that will hit the Spanish media within a couple of days. In terms of a “partnership,” this moment was potentially the death knell for trust and mutual understanding, as well as for their success. That’s not the way it’s turned out, of course, but you can see the threat.


Nor did the numbers, initially, augur something great. The first game together when one of them scored? November 2018 against Real Valladolid, when Vinicius’ wild effort went in. The first game they both scored in? Three months later, when each hit the net in a 3-0 win over Alaves. The first Vinicius assist for Benzema? Ten days later, on Feb. 13, 2019, when Madrid won at Ajax.

Then came the gaps and disjointed play, as well as the frustration from Benzema that boiled over in Monchengladbach that night. In fact, it took two years, from that assist in Amsterdam until earlier this season in the home defeat against Sheriff Tiraspol, for the Brazilian kid to serve Benzema another goal in the Champions League.

But just look at them now.

At 2-0 down, and eliminated, against PSG with half an hour left in the Champions League round of 16, Vinicius looks up when he’s on the touchline and threads the ball on to Benzema’s right boot — precisely the thing he was previously accused of not doing. Against Chelsea, 20 minutes into the first leg of their quarterfinal, Benzema’s right-foot “punch” pass sends Vinicius down the left wing and this time, he doesn’t look up. Instinct guides his radar and he puts the ball right into Benzema’s path for the greatest header of his career and a 1-0- lead in London.

Against Chelsea again — on the ropes, 3-1 down at home, 3-3 on aggregate and just 15 minutes from penalties — again Vinicius gets the ball wide on the left. Benzema has taught him how to handle it; life with “Le Roi de France had helped this phenomenal kid think quickly and act effectively. Benzema has shown him how to “feel” in crucial moments.

It all came together in that instant against Chelsea, who could have been winning 5-0 or 6-0 in that second leg. Vinicius stops, allows his strike partner to dart towards the front post, thus fooling Antonio Rudiger and then, deliciously, holds on to his delivery until the German centre-half is in the wrong place. Benzema has retreated three steps and is, thus, in splendid isolation.

The cross is perfect, the header a peach, and now Madrid, fired by the best-ever Benzema and his new buddy, Vinicius, are 180 minutes away from another Champions League final.

Benzema agrees with me about the importance of the beauty of his football, irrespective of how how seductive the statistics might seem.

He recently argued: “Nowadays, too many people don’t bother to look at what a player does in a match, only at who scores. Next day in the headlines, it’s ‘he’s the best!’ That’s happened to me: bad game, but I score, and I’m eulogised. That’s not the kind of football I like, and not how I understand things.

“When I play, I try to show respect. When I see a teammate in a better position, I definitely don’t think ‘Woah, maybe I can score instead…’ I simply pass him the ball so that he can convert the easier chance. I try to improve things for those around me.”

“People remember what I said about him [in Monchengladbach], but these days he’s nothing like the player he was then. Ask him! It was clear he had so much more to produce: with a few words, a few indications on the pitch I showed him important things about playing in the last 30 metres of the pitch. Now he makes the right decisions about shooting, about crossing, about lifting his head to that he can see the picture in front of him. He’s doing what he should have been doing for some time. Vini is young, but very good: now there’s nothing needed to be said to him.”

Vinicius, speaking to UEFA, backed up the narrative: “[Karim]’s a great person: since the beginning, he’s always given me support and confidence. But mostly it’s about his tips on the pitch. It’s a dream come true to be playing with him — someone I could once only see in video games! His quality is incredible. I’ve never played with a forward at the level he plays: he’s different from the rest.”

So right now, Vinicius, and Real Madrid, need to give thanks to Benzema for having educated the 21-year-old whose brain now keeps up with his blistering pace. By December, when he’s lifting the Ballon d’Or, I’d love to hear Benzema admitting: “Thanks, kid — I owe you.” 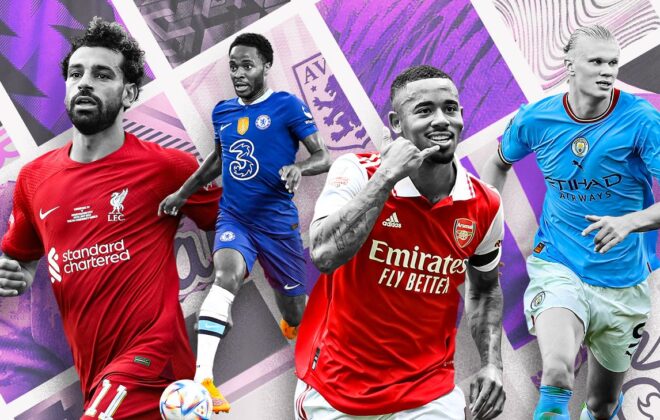 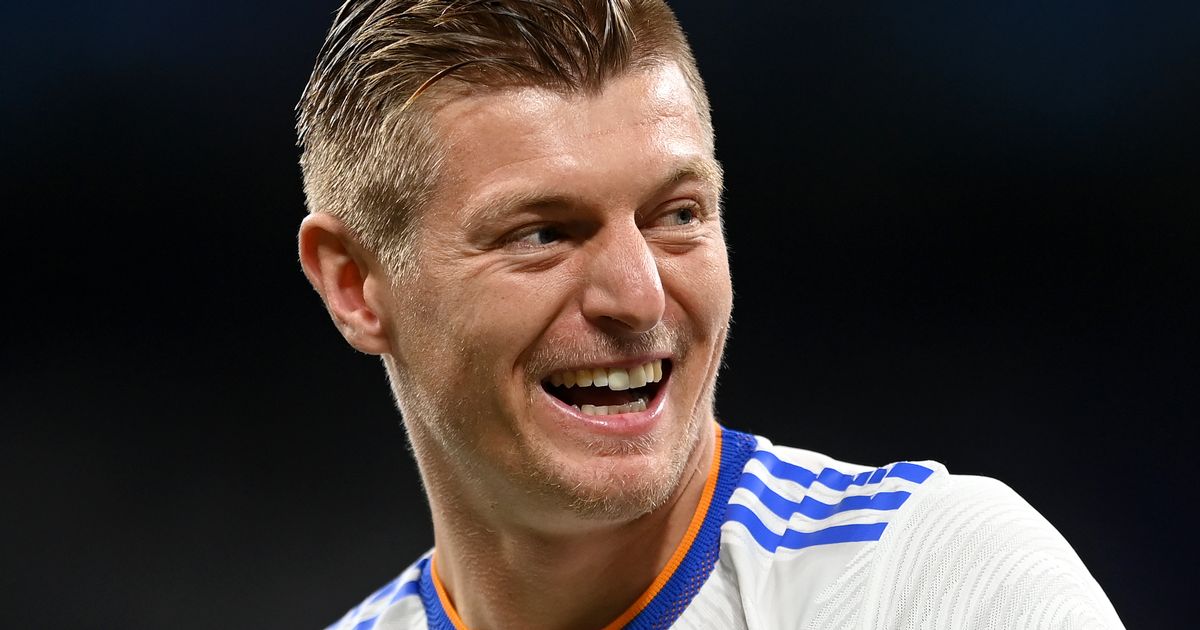